Originating as a pagan tradition, these ornamental Easter eggs have always been a symbol of Resurrection and the hope for renewal. In Pagan times they were painted to ensure the coming of spring. Under Christianity they symbolize hope in the resurrection of Jesus Christ.

The name “Pysanka” is derived from the verb “to write”. And while it first appears that the designs are “written” or painted on the eggs, the technique of painting a traditional Ukrainian Easter Egg is a little more complex. In reality a layer of hot beeswax is “written” on the egg to give design to the area of the egg that will not be colored when the egg is dipped into dye. The old wax layer is then removed, a new layer is applied, and the egg is dipped into a different color. This process is repeated for every color painted on the egg.

Many superstitions were attached to pysanky. Pysanky were thought to protect households from evil spirits, catastrophe, lightning and fires. Pysanky with spiral motifs were the most powerful, as the demons and other unholy creatures would be trapped within the spirals forever. A blessed pysanka could be used to find demons hidden in the dark corners of your house.

Pysanky held powerful magic, and had to be disposed of properly, lest a witch get a hold of one. She could use the shell to gather dew, and use the gathered dew to dry up a cow’s milk. The witch could also use bits of the eggshell to poke people and sicken them. The eggshell had to be ground up very finely (and fed to chickens to make them good egg layers) or broken into pieces and tossed into a running stream.

The cloth used to dry pysanky was powerful, too, and could be used to cure skin diseases. And it was considered very bad luck to trample on a pysanka—God would punish anyone who did with a variety of illnesses.

There were superstitions regarding the colors and designs on the pysanky. One old Ukrainian myth centered on the wisdom of giving older people gifts of pysanky with darker colors and/or rich designs, for their life has already been filled. Similarly, it is appropriate to give young people pysanky with white as the predominant color because their life is still a blank page. Girls would often give pysanky to young men they fancied, and include heart motifs. It was said, though, that a girl should never give her boyfriend a pysanky that has no design on the top and bottom of the egg, as this might signify that the boyfriend would soon lose his hair.

Each region, each village, and almost every family in Ukraine had its own special ritual, its own symbols, meanings and secret formulas for dyeing eggs. These customs were preserved faithfully and passed down from mother to daughter through generations. The custom of decorating pysanky was observed with greatest care, and a pysanka, after receiving the Easter blessing, was held to have great powers as a talisman.

Pysanky were traditionally made during the last week of Lent, Holy Week in the Orthodox and Greek (Uniate) Catholic calendars. (Both faiths are represented in Ukraine, and both still celebrate Easter by the Julian calendar.) They were made by the women of the family. During the middle of the Lenten season, women began putting aside eggs, those that were most perfectly shaped and smooth, and ideally, the first laid eggs of young hens. There had to be a rooster, as only fertilized eggs could be used. (If non-fertile eggs were used, there would be no fertility in the home.) 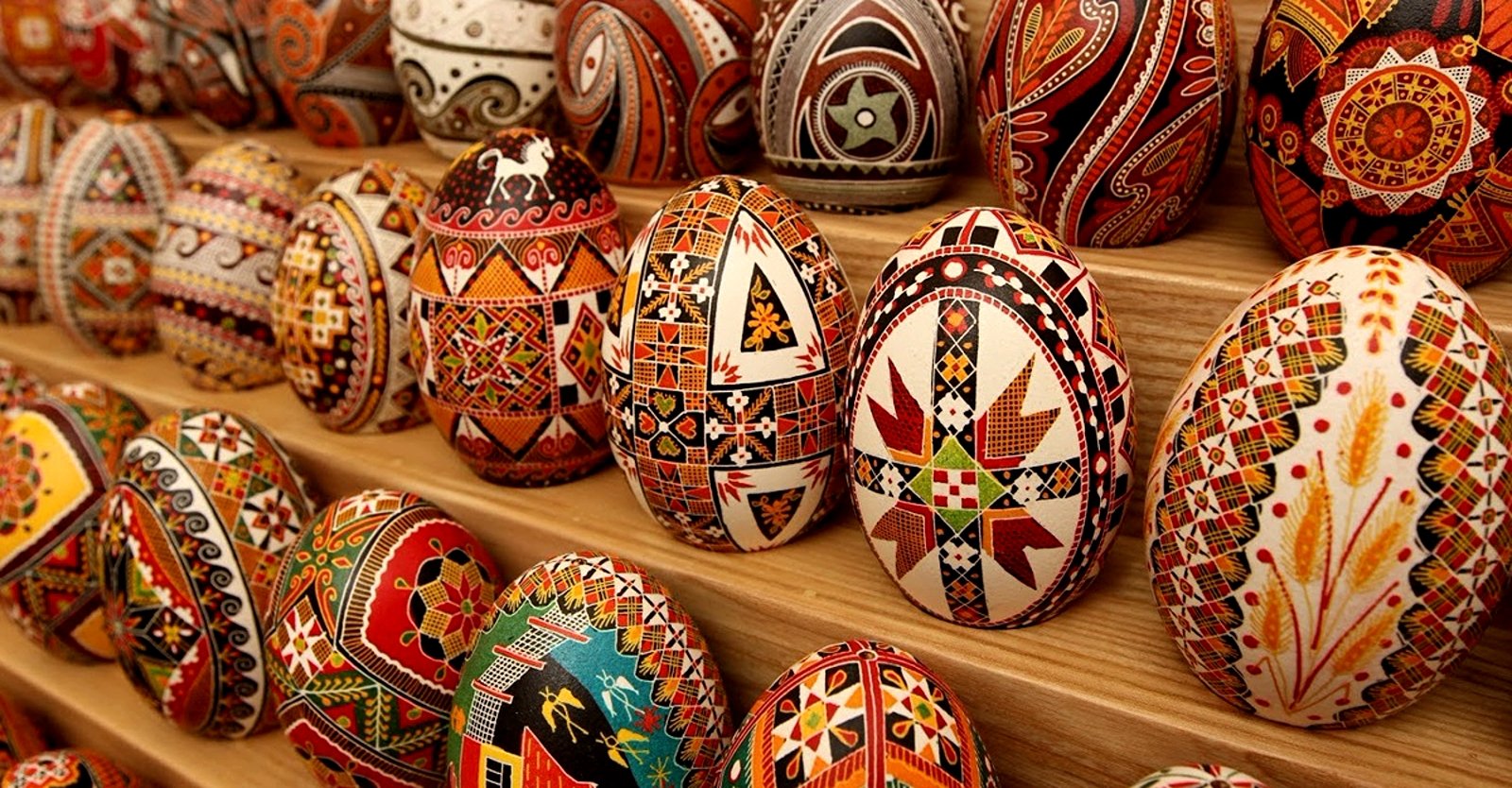