Ukrainian embroidery takes the special place among other Ukrainian decorative arts. It is the result of complicated and painstaking labor, filled with great color variety and sacral ornaments. There are two variants of embroidery, handmade and machine, which are used for male and female traditional Ukrainian shirts – vyshyvanka, dresses, towels and household items, such as tablecloth, blankets and pillowcases.

Ukrainian hand embroidery clothes have great value and deep history. According to archaeological researches and finds embroidery, as a kind of national art, existed since the ancient times.

Embroidery is an ancient and symbolic tradition in Ukraine. In 513 BC, Herodotus, the famous Greek historian, in describing the invasion of Darius, mentioned that the Thracian-Dacian people who lived in what is now the Balkans and western Ukraine used embroidery to decorate their clothes. Excavations of cities from the 1st century AD have revealed examples of embroidered clothing in the territory of Ukraine. Other early examples of embroideries include pre-Christian goddess motifs. There are eleventh-century examples of embroidery in the Saint Sophia Cathedral in Kiev on frescos and miniatures. Many of these early examples have distinct similarities to the local embroidery throughout history. Ukrainian embroidery was an everyday art in the common people’s lives until the 19th century, when it became more of a craft.

Ukrainian embroidery designs and stitches had a long period of creation throughout centuries, developing in such a way authentic Ukrainian style.

Needlework was traditionally considered to be exceptionally the women’s work. Cross-stitching skill was inherited from grandmothers to mothers and then to their daughters.  Each family had its own recognizable symbols and patterns that made the great historical value for new generation. Nowadays some Ukrainian villages still have hereditary needlewomen, who can introduce national ornament features and teach some embroidery techniques. 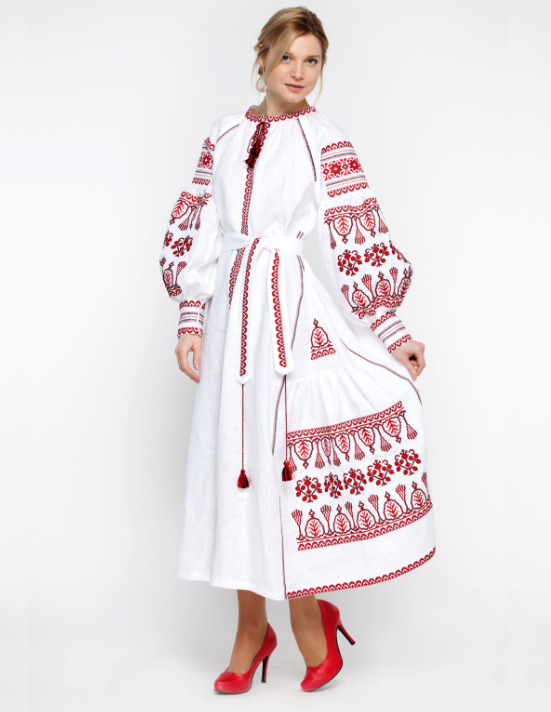